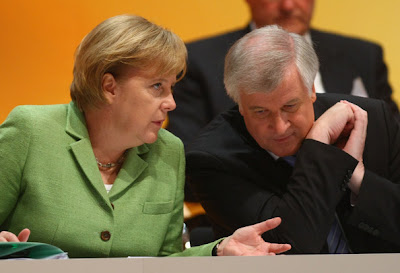 News is trickling out from inside Germany, that is as reported in the German media, but not internationally, that one hell of a tussle for power is in process, with pro-EU lawyers trying to neutralise the decision of the German Constitutional Court, while less EU-favourable politicians try to consolidate the decision and ensure that Germany is set free from the effects of the Lisbon Treaty.

According to news magazine Spiegel, CSU head Horst Seehofer wants to ensure that “the German government has to issue a statement that the Treaty of Lisbon is valid within the interpretation of the Federal Constitutional Court.” He underlines that this is “a crucial point within the negotiations” for the CSU. This demand is heavily opposed by the CDU and SPD.

One can only imagine the strains that this is putting on the CDU/CSU alliance as it prepares its joint election platform, in which Merkel, head of the CDU, is German Europhile Number one, and Seehofer, head of the much smaller CSU (but nonetheless essential to holding a Parliamentary majority), (both in picture above – June 29th 2009)) is German Eurosceptic number one.

You can be certain that no one will be watching the outcome of this battle more closely than David Cameron, and the others in the Conservative leadership such as Hague, who are under intense electoral pressure to sound more eurosceptic. If Seehofer succeeds in neutralising Lisbon in Germany, that will open the floodgates. That’s why not a soul in Britain will ever hear of any of this. But even in total news silence, the criticasl events which could yet derail the EU are taking place.