The CSU’s bold attempt to put Germany’s EU relationship on a firm Parliamentary footing has, so far, met with the usual kind of watering down to near meaningless as was expected. The German CSU-led Lisbon rebellion is, for now, prevented from shafting the whole Treaty, but the Lisbon cat is still out of the bag.

Since the Constitutional Court declared its opinion, politicians realise that a few potshots can be usefully taken, and that in shooting terms, the Lisbon Treaty is , as far as Germany is concerned, still very much ‘in season’.

The German system demands consensus, but whereas in the past, consensus was easily achieved to promote the EU’s crushing effects of German democracy, now the crunching of German independence by the EU bureaucratic jackboot, is met with open declarations of disapproval from all sides of the political spectrum. Apart, that is from the central coalitions who depend on the EU for their continued hold on power. Merkel without the EU would be politically naked, and can anyone imagine what a terrible sight that would be?

The German media reports that Germany’s ruling political parties, the CDU/CSU and the SPD, have reached an agreement on how to strengthen the parliament’s rights in the EU decision-making process.

As reported yesterday (see here) however, the Bavarian CSU faction was not able to enforce its main demands, such as binding Bundestag guidelines for the government when negotiating at the EU level, ,or a requirement for referendums before future EU enlargements.

PICTURED – Seehofer (CSU) finding anti-Lisbon policies sell well in Bavaria, while CDU Merkel brings him to heel, all smiles, to keep their ‘conservative’ coalition together, leaving EU opposition to the left wing.

In the end the CSU gave in to a softer position, under which the German government must hear the parliament’s opinion but is not bound by it. However if the government cannot enforce crucial requests from the Bundestag, they will have to provide detailed justification. The parliamentary head of the CDU, Norbert Röttgen, pointed out that it is important that Germany is not bound by binding statements of the Bundestag and retains a degree of flexibility in order for Germany to “continue being the engine of European integration”.

The agreement of the governing coalition on the new law is backed by the Greens and the Liberals and enjoys an overwhelming majority, except for the left wing party Die Linke which is strongly opposed to the deal. The bill will have to pass a first reading in the Bundestag on 26 August and a second reading on 8 September. The Bundesrat (upper house) is set to approve the deal on 18 September, before passing it for final approval to the Constitutional Court. 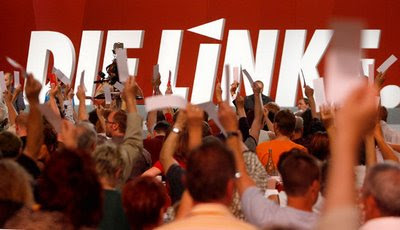 German media reports on the CSU/CDU split over Lisbon in English HERE.

Die Linke, who claim that the agreement does “not even nearly” match the requirements set out by the Constitutional Court, yesterday repeatedly threatened to make a constitutional complaint.

Anti-EU noise is clearly gaining in popularity in Germany. While in the Czech Republic next door, it was always good politics to hurl a few rocks at the EU’s growing bureaucratic power.

Meanwhile, Czech daily Ceskenoviny reports that a group of Senators from the ODS party will file a complaint against the Lisbon Treaty with the Constitutional Court only after lodging a complaint against the law on a EU-related ‘special mandate’. The special mandate prevents the Czech government from approving transfer of powers to the EU without the parliament’s agreement. Senator Jiri Oberfalzer said that the law needs to change so that Constitutional Judges can control whether individual steps taken by EU bodies are in accordance with the Czech Constitution.

A year ago anti-Lisbon politicians in all countries could be portrayed as sad solitary and deluded miscreants in need of character correction. But now there is a growing cacophony of voices all competing to be the siren of a new democracy, and to bring an end to the centralisation of power across a continent.

Can you hear them all now with their hands up begging to be chosen – Teacher, teacher! Me Me Me, Pleeeeeease.

This opposition can be sidetracked for now, but in Germany, it seems hard to imagine the EU ever being beyond criticism again, and meeting with general approval. The first blow has been struck. The system has held this time, but each rock that impacts on the citadel brings the moment of collapse a step closer.

Could it be that the fall of the Berlin Wall is, in time, to be followed by the collapse of the Brussels Ceiling, and Germany to live for the first time as one of the world’s leading and most vibrant democracies? Germany does not want to slide into totalitarianism a second or third time. Democracy and freedom are the only options she has not yet tried. Her people can awake from a hundred year slumber, and reach at last for the civilised heights that Germans are well capable of.

The pressures are building, and the cracks in the ceiling appearing.