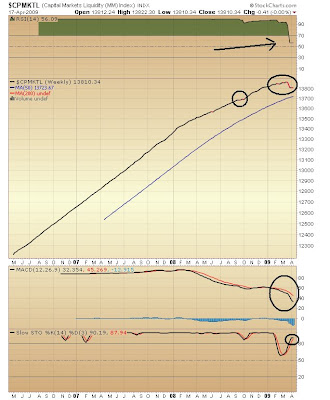 I’ve been blogging a while, predicting various market moves. My favourite one of these is undoubtedly the sinking value of the Euro versus all other currencies. The last two months have seen the Euro moving the other way, rising a little against the dollar. But the underlying weakness of the Euro is about to send it reeling.

I am posting two charts here, one showing how the euro is moving into the next downwave. This is occurring just as capital market liquidity is collapsing. The capital market fall in liquidity in October sent the euro tumbling and the dollar on a major rise. The collapse in liquidity on this occasion is of a much greater scale as the second chart shows.

I’m not trying to be gloomy, but the coming reversals in markets are likely to be of the stunning variety, with the Euro leading the way to the floor. As for the parity with Sterling predicted by so many last January, Sterling is now 13% higher.

The only problem will be what to do with all the worthless Euro notes in circulation. Wallpaper? Not in my house,obviously, but many might be drawn to the idea.

One Response to “Euro About To Receive Market Kicking”