Any thought that the EU will be able to pull itself out the economic hole it has created should be put to one side. The symptoms of total chaos are now starkly apparent, as no one has any idea whose responsibility it is to deal with the mess. If it wasn’t so serious, it would be comic.

The world will soon see that Europe is headed for the abyss and no one anywhere will be in any position to stop it. Read the report from Open Europe today, quoted in full below.

The IHT reports that the Obama administration appeared to turn up the heat on European governments ahead of April’s G20 summit in London, quoting President Obama saying, “I think it’s very important for the American people to understand that as aggressive as the actions we are taking have been so far, it’s very important to make sure that other countries are moving in the same direction, because the global economy is all tied together”.

Thomas Mayer, Chief European Economist for Deutsche Bank, is quoted in the IHT arguing that Europe is acting too slowly: “They are in denial, and hoping that something from the US will come along to help them out. The European system isn’t designed for taking the unconventional policy measures that are now needed.”

The article notes that German leaders are wary of sparking a long-term bout of inflation if they borrow and spend too much, while Germany and other countries in Europe do not want to shoulder the burden for more troubled economies.

The Express reports that this week Chancellor Alistair Darling pressed other EU finance ministers to agree more funds to bail out eastern Europe through the IMF and the EU. Open Europe’s Stephen Booth is quoted saying, “While Mr Darling’s desire to bail out struggling member states is noble, taxpayers will be outraged to hear that the Government is planning to spend even more of their money at a time when everyone is struggling to cope with the recession.”

Philip Lane, Professor of Economics at Trinity College Dublin, is quoted in the IHT saying, “If a country were to need help, it’s not clear if they should go to the European Union, the IMF or the ECB [European Central Bank]. The answer seems to change day to day.”

Well Philip, let me advise. Buy dollars, peg the Irish currency to the dollar, and quit the Euro-Titanic while you still can. Keep all your debts in euros however. They will evaporate before your eyes. Democracy can return to Ireland once more, and corruption be driven from your shores.

The comparison between the mess in the EU should be made with the clarity of the American response to the economic downturn. In the USA there is still one man who knows he is responsible and is seen to be responsible, characterised by Harry Truman’s phrase ‘The Buck Stops Here’.

Read the history of the phrase – U.S. president Harry S. Truman had a sign with this inscription on his desk. This was meant to indicate that he didn’t ‘pass the buck’ to anyone else but accepted personal responsibility for the way the country was governed.

Truman didn’t originate the phrase, although it isn’t likely that we would ever have heard of it had he not adopted it.

Fred M. Canfil, United States Marshal for the Western District of Missouri and a friend of Truman’s, saw a sign like it while visiting the Federal Reformatory at El Reno, Oklahoma in 1945. He thought it would appeal to the plain-speaking Truman and arranged for a copy of it to be made and sent to him. It was seen on the President’s desk on and off throughout the rest of his presidency.

On the reverse side, i.e. the side that Truman saw, it was inscribed, “I’m from Missouri”. That’s a short form of “I’m from Missouri. Show me”. Natives of that state (a.k.a. the Show Me State), which included Truman, were known for their skeptical nature.

What would be the EU equivalent? ‘You’re Not My Responsibility’, and on the obverse ‘Where’s My Cut?’ 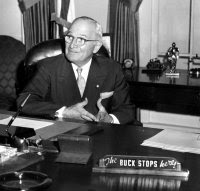 The problem in Europe is that ‘fiscally responsible’ countries such as Germany, Netherlands and Finland don’t approve of more economic stimulus, preferring monetary discipline, while the countries that are facing insolvency, like Ireland, Portugal, Greece, Spain and Italy, are desperate for funds. Germany prefers to maintain the ‘credibility’ of the Euro, while the weaker countries fear the effects of the downturn and just want the money for short-term emergency assistance to their distressed economies.

The resolution of the two approaches should be made by a single central authority. In the USA they have the President. The EU has a series of summits and meetings where 26 member countries are expected to reach agreement. In the past they all agreed as the pay-offs for the politicians were huge. But now the European recession is threatening many of them with being thrown out of office, they are finding agreement impossible. The splits are cracking open the whole edifice as its currency sinks.