The discussion about the so-called ‘solvent’ and ‘creditworthy’ countries of Europe bailing out the insolvent countries has not entered into reality as yet. The trouble is the scale of the problem. Not only are Ireland, Greece, Italy, Portugal, Spain in severe difficulties. So too are Poland, Hungary, Czech Republic and Romania from the bigger East European countries, as well as Latvia, Estonia, Lithuania, not to mention Ukraine.

The only country it is said that is financially strong enough to orchestrate a rescue for the less fiscally responsible countries of Europe is Germany. And yet Germany is already finding trouble in raising enough money for her own banking rescues. Britain is fully overstretched, and France too is looking very wobbly.

The politicians in Germany have no choice but to talk of saving the European economy from meltdown, but in truth they don’t have enough borrowing power or reserves other than gold, and if those are all put on sale, the price of gold will crash. The IMF doesn’t have enough funds to resolve all the troubles that are coming into view either. The only countries that might be able to help Europe are outside Europe – the USA and China.

And yet the USA is fed up with Europe’s lack of commitment to NATO and the alliances in Afghanistan and Iraq, and would be highly resentful of being asked to carry the load. If the USA is expected to bail out Europe, there will surely be a political price to pay. Germany is at last spending more money on defence as part of her economic stimulus package. See FT article HERE.

Much will come down to American preferences for a European future. Germany would insist on higher taxes around the Eurozone if she were the agent chosen by the USA to hold the EU together. And yet the burying of Europe in red tape and high taxes will only ensure the probems of Europe’s low growth economy will carry on into the future.

Ireland for example is being threatened that if Germany comes to her rescue she will be forced to raise her Corporation Tax rate from 12.5% to the more general 25-30%. That would block one of Ireland’s main appeals to foreign investors and slow down her economy, the exact opposite of what she currently requires.

The talk of countries leaving the Euro is blocked by the threat of their relaunched national currencies diving in value against the Euro. And yet it might soon be the Euro that takes the dive. If countries pegged their relaunched national currencies to the US dollar, and kept their outstanding debts in Euros, they could find their debts evaporating as the Euro economy sinks in a sea of debt that no government is in any position to hold back.

The US could help Europe the most by offering to support a peg to the dollar in Ireland, for example, and reducing load on the eurozone that way, and setting that as an example of how individuals countries could walk out from their economic troubles.

As for the move to one world currency that is the ultimate aim of the Bildebergers, why would it matter if European countries were in Dollars or Euros? Their intention is ultimately to link the two anyway.

In the meantime the Euro looks as if it could be taking an early bath, in all probability, and Germany will be powerless to stop it happening, despite the strong words of her political leaders. The scale of the problem is simply too vast, and there is no time. China would no doubt assist as she could in preserving Europe as one of her most valuable markets, but there seems little doubt that world political leadership will soon rotate back to the USA as Europe founders on a rock of unsustainable debt. 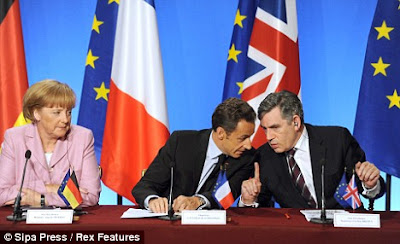 See The Times report today on Gordon Brown proposing that the USA takes part in a worldwide programme to stop the depression/recessionHERE. I guess it’s all coded to mean ‘please help Europe’ but of course he wouldn’t say that openly, would he!!!!

EXTRACT – Brown is under pressure to persuade American political leaders to sign up to bold aims for the G20 summit of industrial and leading developing nations, which is to be held in London next month.

Many US politicians believe economic policy should put America first, and have shown little interest in concerted global action. Brown will argue for a renewal of the transatlantic relationship, with the two powers working together to solve global economic problems.

The prime minister will borrow from the rhetoric of Franklin Roosevelt, who introduced the government-financed New Deal to tackle the US Depression of the 1930s. He will argue that his 21st century “global new deal” will also require public spending on a huge world-wide scale.

Writing in The Sunday Times today, Brown calls for “universal action to prevent the crisis spreading, to stimulate the global economy and to help reduce the severity and length of the global recession”.

Reading between the lines, you might narrow it all down to two words ‘please help’, and he means ‘Europe’ not ‘Britain’, although Brown is as guilty as anyone of blowing Britain’s economic strength in pointless government spending and stealth taxes.

All credit to The Economist which has finally ‘got it’ regarding the scale of the financial problems facing the EU. See The Bill That Could Break Up Europe. 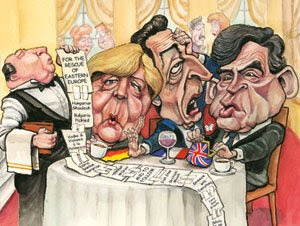 3 Responses to “America Will Have To Bail Out Europe”