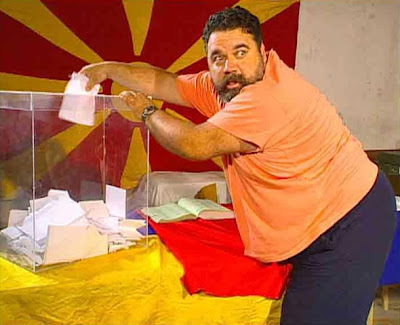 The problems with postal vote fraud in Britain are well known. Less so are the allegations of ballot box tampering regularly made by the BNP. The topic of electoral fairness has not yet burst into the open in Britain as it should be doing. And yet the November poll in which Labour miraculously held Glenrothes with a sizeable 5000 vote margin when polls were saying that the SNP were within a hair’s breadth of taking the seat have aroused suspicions, especially as the electoral register has been carefully ‘disappeared’ since the vote.

Notable among those drawing attention to the result at Glenrothes in November and its suspicious circumstances is blogger Mike Smithson of Political Betting, who is admired throughout the political blogosphere for the fairness and accuracy of his reports. I saw a blog post of his on this topic in which Smithson all but alleged electoral fraud was behind Labour’s victory HERE, focussing on the fact that the register that records who voted has been ‘disappeared’ since the vote.

He recently added THIS more considered explanation of what is going on. Any objective view of the dishonesty implied by Smithson should be to find it all totally shocking.

Looking back in my own blog to September 2006, I find a blog post I wrote on postal voting fraud, which was already being considered by many as a seriosu threat to the fair result of elections. It seems about time that people in Britain wised up to the attempts being made to demolish their democratic system. Things have advanced a lot further since the mass fraud of the general election of 2005, to the point when election rigging and its associated pollster rigging is now commonplace in Britain.

At least Mike Smithson is at last aware and awake to the possibilities.

But when will the masses start to realise that they are being politically defrauded?

You can read my updated and relinked 2006 post below titled ‘Did Labour Win 2005 By Postal Voting Fraud?‘ –

“Labour scored around 25% in local elections in 2004 and 2006, but managed 35% in the general election (GE) in 2005. A different pattern is expected in local compared to national elections, but not usually by such a large margin.

Articles had appeared in the media about large scale postal voting fraud about to happen in the General Election in 2005, but these suddenly fell silent on the matter two weeks prior to the poll, no doubt due to election reporting rules.

Many voters across Britain turned up to vote and were told that their vote had already been cast postally. These included two BBC reporters, John Humphreys and Mariela Frostrup.

The law had been modified by Labour in 2001 relaxing the previous restrictions on Postal votes. Parties were to be allowed to handle their own postal votes. This should never have been allowed. Only election officials and voters should be involved. see THIS.

In Northern Ireland postal votes are extremely hard to acquire requiring proof of identity etc so that cheating is impossible. In the rest of the UK the system is becoming a farce.

George Galloway Of Respect claimed that in the GE he was nearly defeated by Labour harvesting around 1000 fraudulent postal votes in his constituency Bethnal Green. He scraped home by around 80 votes. There were many cases reported of voters being turned away from polling stations, who claimed that their votes had been used by others postally.

The numbers from the GE 2005 are as follows – Labour polled 9.4 million. Conservatives came in with 8.5 million. Postal votes were reported in the Press as having been 6 million. The Electoral Commission however states that the actual total was in excess of 4 million, although Parties had requested 6 million application forms.

Since the GE the media have been mostly silent on the topic of electoral fraud. The government have not substantially changed the law since, although they claim to have resolved the situation. They have made it a criminal offence to attempt to vote fraudulently.

This conveniently means that once an allegation of fraud has been made and is being investigated, it becomes a Police matter, and is subject to the rules of criminal enquiry and legal procedure. The Press can say little, so the topic rarely makes the headlines.

As any individual case is very hard to prove beyond reasonable doubt, the criminalisation of voting fraud provides little check. Not to mention that Police Forces are becoming more political than they used to be, and it is not inconceivable that prosecution and investigation could be selectively applied.

It would be far more effective to put in place controls that prevent those with criminal intent from being able to cheat, than making Police Forces run around allocating time and resources on cases that are almost impossible to substantiate. Fraud is a notoriously difficult crime to prove. The actions of a fraudster resemble those of an honest person. It is only the intent that is different.

In the 2006 local elections, the BNP claim that postal voting scams were used to bar them from winning many seats in Birmingham and London. There are also alleged substantial discrepancies between the numbers of votes at the counts and the numbers of people who were logged going into polling stations.

Richard Mawrely QC famously stated in 2005 during an electoral fraud trial that the postal voting system in Britain would ‘disgrace a banana republic’. The situation has attracted international comment from the ODIHR in Warsaw

The only substantive article I have seen on this appeared in The Guardian in August 2005.

International election monitors yesterday applied fresh pressure on the government to introduce new measures to combat postal voting fraud. Officials from the Warsaw-based Office for Democratic Institutions and Human Rights (ODIHR) yesterday urged ministers to ensure that voting materials were only handled by election officials. Their comments followed controversy during the general election campaign, which was marred by accusations of postal voting fraud and claims that parties were exploiting an insecure system by “harvesting” postal vote applications. Article continues 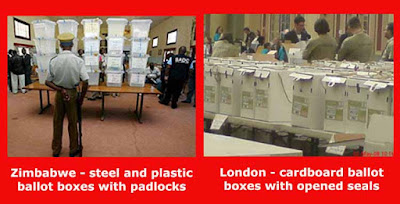 2 PICTURES – nicked from the BNP website
“It is a matter of public record that the problems with this election were the largest number that have come together at any one point in recent years,” he said. “Postal voting diverted attention away from everything else. Most people who were involved are saying fairly publicly that this must never happen again.”

For further reports of tampering with votes and elections, the British National Party is making a series of allegations of ballot box tampering. Read the evidence before dismissing the claims.

The evidence of large scale voting fraud taking place regularly in Britain is growing. When will the people of Britain wake up and do something about it? 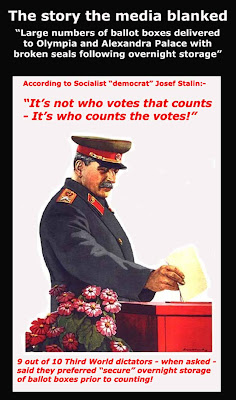 Britain now allows the overnight storage of ballot boxes prior to counting. Mmmmmmmm.