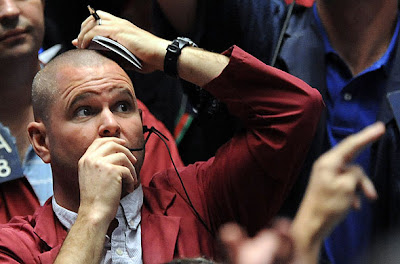 Anyone following the great gold boom stories running throughout all media for many months – sufficiently to convince most ordinary folk that gold is in huge demand, might be surprised to hear by exactly how much gold demand has increased. ETFs (Exchange Traded Funds) are buying up 1000’s of tonnes of gold, we are told, and storing it away for their clients hoping to use their gold as a safe financial haven.

So are you sitting down, ready to hear how much more gold has been sold in 2008 compared to 2007? The figures could be shocking so maybe you should equip yourself with a brandy first before reading them.

OK, you’re ready. Here’s the figure for you –

Here is yet more evidence that the great gold ETF game is a farce, or even worse, a giant con. Demand for gold by the jewelry industry worldwide is collapsing, and yet all these tonnes of gold being bought by speculators aren’t even raising gold demand above its normal level, providing yet more evidence that ETFs are not holding physical gold but long postions in the futures market.

Now that IMF sales will be coming in, speculators are being asked to pay near $1000 an ounce, and some people (like me) are beginning to query whether the ETFs actually hold any physical gold at all, you have to ask yourself how long it will be before gold heads for the floor.

What’s the real story going to be? Gold at $500 within 6 months? I would think that very likely.

CATCH UP FROM EARLIER POSTS

In earlier post comments, Nostradamus, apparently.. gave a link to Seeking Alpha. The text it contains about Gold ETFs is quite shocking. Anyone holding any investment in ETFs should read the following words extremey carefully.

In December I published A Problem With GLD and SLV ETFs where I briefly perused the GLD prospectus. It concluded, “For these reasons including (1) the quality of the gold is at issue, (2) no audit of the physical metal is permitted, (3) counter-party risk impregnates the investment vehicle and (4) there are strong conflicts of interest with complicit players in the central bank gold price suppression scheme, GLD and SLV appear impotent in reducing inflation or counter-party risk.”

From the original article, “Page 12: ‘In issuing Baskets, the Trustee relies on certain information received from the Custodian which is subject to confirmation after the Trustee has relied on the information. If such information turns out to be incorrect, Baskets may be issued in exchange for an amount of gold which is more or less than the amount of gold which is required to be deposited with the Trust.’ On page 11:’In addition, the ability of the Trustee to monitor the performance of the Custodian may be limited because under the Custody Agreement the Trustee has only limited rights to visit the premises of the Custodian for the purpose of examining the Trust’s gold.’ Therefore, it appears that an audit of the actual physical gold is precluded (update: See comments 25 & 26).”

Gold buyers, you are being sold an investment vehicle for storing gold on your behalf which states quite clearly that you are not allowed to know if there is any gold there at all!!!!!!!!!!!!! Are you sitting comfortably? I don’t think so.

Thank you Nostradamus apparently ( a lawyer who reads the small print in prospectus’) for the link.

One is forced to consider what kind of regulatory environment permits such appalling deception to be carried out on tens of thousands of investors in the first place. As many say, the US government is actively trading in these markets with agents placed in the offices of the likes of Goldman Sachs, shorting gold as it drives gullible investors to take up the long positions. Only a government could be carrying out such frauds and expect to get away with it.

Screen of 24 hour spot gold market from kitco.com. The ETF rally stalled at $980 as sellers appeared in the USA and Hong Kong yesterday (the red line). Will the rally resume or will people start to see through the hype? Today 20th February 2009, the market pipped $999.90 after London-based rally but missed the magic $1000 in the spot market. US sellers came back into action again, sending the price down to $989 as I write. Is it possible that in New York and Hong Kong they’ve realised the vulnerability of the rally, while in London no one suspects the ETF scam as yet?

Compare the spot price chart with the 10 year chart, which shows how vulnerable the recent rally would be to a correction. The chart suggests a fall to $600 or even $450 is on the cards.. The rally is based in the futures market. Each contract has one player going long and one player going short. Once the price starts falling the shorts clean up, and the longs get wiped out. The trick is to keep the longs buying as long as you can. ETFs mean that the longs don’t even know that that is what they are buying, imagining they own physical gold.

See the full article and technical discussion of the gold ETF accounting issues at Seeking Alpha Is the GLD ETF really worth its metal?. The author and contributors consider all possible explanations for the strange language used to describe the gold holdings, apart from the most likely – that the gold is held as long positions in the futures market.

See Gold tipped to rise in September 2009 on www.sahilkaps.wordpress.com