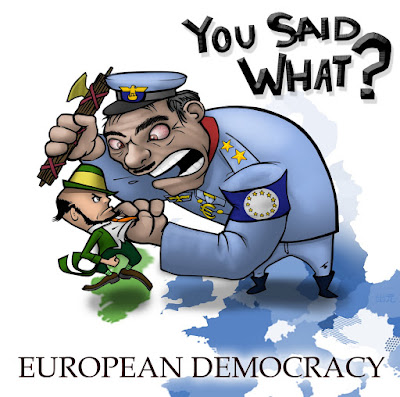 Feelings in Ireland are running high. The arrogance of the EU, the threats being made against Ireland by the EU, and the false promises, are starting to rile the quiet independent spirit of the Irish. This cartoonist has managed to put into picture form the anger rising in Irish hearts against the unreasonableness of the EU, and its unsuitability to act as the government of Europe. A picture is worth a thousand words. Ireland should adopt this cartoon as the banner of the movement to keep its freedom from totalitarian tyranny. Declan Ganley and other campaigners should place it in their literature. It is powerful.

This is the email text I received along with the cartoon.

I am an artist and Illustrator, I drew this
Illustration to express my feelings about the lisbon treaty.
It seems to me that there will inevitably be a second referendum
forced on the Irish people.Feel free to use the image as you see fit.
Larger more detailed versions available on request.
yours sincerely
David McDermott
davidjamesmcdermott@gmail.com

Nice one, David. This should be seen in every pub and shop in Ireland. Slainte!

6 Responses to “Ireland Punches Above Her Weight”