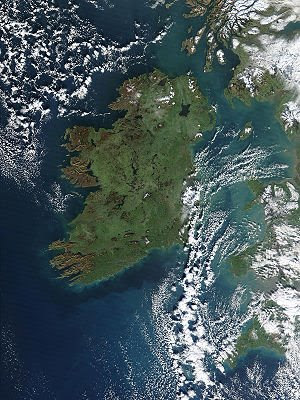 Cries of pain are emanating from all corners of the highly indebted eurozone, as governments in Ireland, Spain, Italy and Greece career ever closer to default. The euro is a common currency between ‘our’ countries, they say, and so those countries’ governments should all stand or fall together, and issue debt linked together, guaranteed by all governments of the eurozone acting as one.

The Irish economist David McWilliams (see HERE) has stated recently that unless such a trans-EU debt issuance is carried out, then Ireland would do better to default and simulaneously quit the Euro, triggering a domino effect of defaults and euro secessions across Southern Europe. Such an event is said to be impossible as the economic crisis it would cause would be unparallelled in the human history. But is it impossible?

Germany, the only country which has the ability to stitch together such a joint debt issuance across all eurozone governments ain’t gonna play ball, and so collapse of the eurozone is going to be the only possible outcome eventually. So why don’t countries like Ireland get on with it, before the eurozone experience drags them through more and more trauma?

This report from Open Europe tells the story simply enough –

Germany rejects common issuance of debt by eurozone governments;
Almunia rejects talk of a split in the eurozone
FT Deutschland reports that Germany’s Finance Minister Peer Steinbruck yesterday rejected proposals supported by Italy and some other European countries in favour of the common issuance of debt by eurozone governments, saying “I will not accept any deterioration in Germany’s financing conditions”. The newspaper writes that the plan to counter intra-eurozone tensions is now therefore dead.

Commenting on whether the Euro was a mistake, economist Barry Eichengreen writes on the Vox website, “The euro area will hang together, in other words, because the decision to enter is essentially irreversible. Getting out is impossible without precipitating the most serious imaginable financial crisis – something that no government is prepared to risk.”

EU Commissioner for Economic and Monetary Affairs Joaquin Almunia has rejected any suggestion of a split of the eurozone. Le Monde notes that the current economic crisis is however putting the monetary union under severe strain and that certain states are asking for lower rates of borrowing than those currently in place. The paper highlights that this growing and persistent pressure could bring about the eventual demise of the monetary union.

Poor old Ireland. It looks like each Eurozone country will have to find its own solutions to its own problems. On the other hand, won’t that be so much simpler?

The funny thing about Professor Barry Eichengreen saying that the collapse of the eurozone is impossible is that it was him who was giving seminars as recently as last year saying that collapse of the Euro was inevitable. I guess he’s finding that telling the truth to 500 million people that they’ve made an almighty cock-up hasn’t made his career much easier, or himself too popular.

But make no mistake, Barry Eichengreen is simply terrified of the consequences of the inevitable break-up which he’s been predicting, and is running scared of the accuracy of his predictions.

PICTURED – Professor Barry Eichengreen of Berkeley University California, thinking ‘Oh Shit – what have I done!!’ Just to remember the old ‘Euro is dead’ Barry Eichengreen rather than the newly created ‘The Euro cannot possibly collapse’ version, see the banner for his seminar in Stanford University exactly a year ago titled boldly The Collapse Of The Euro Area. No recantation last year – why the change now, Barry?

George Soros and his Quantum Fund are making headlines yesterday predicting Sterling/Dollar parity, but are they missing a trick? Maybe the big story of 2009 is going to hit George a lot closer to home. The Euro’s collapse will make Sterling’s fall seem like a cake walk. And the Sterling position is being misrepresented in any case. See FT HERE.

George should give Barry a call, I think.

Going back and reading this link from 2005 shows that Eichengreen was not the first to see the Euro was destined for failure.

Sir Alan Walters, Mrs Thatcher’s economic guru who stood up against Geoffrey Howe’s and Nigel Lawson’s attempts to ram Sterling into the common European currency, could see clearly over 20 years ago in the late 1980s. the kind of problems that are becoming Euro-critical today

EXTRACT – Sir Alan Walters was Margaret Thatcher’s personal economic adviser when she was prime minister. In May 2002 he said that the euro would collapse under its own internal contradictions and strains by May 2007.

Walters explained that euro-member countries had different growth and inflation rates, persistent high unemployment and some had severe budget deficits which would cause the instability which would lead to the collapse of the euro.

“People who think it will go on forever should think again,” he said. “Nothing lasts forever in monetary economics.”

Although the accepted wisom is that the euro is permanent, particularly since the conversion from national currencies to euro notes and coins at the start of the year, the history of monetary unions suggests a high failure rate. Any country leaving the euro would have to reissue its former currency and face significant economic dislocation.

Walters maintains that the only way that monetary unions can work is if they are preceded by political union.

In the early 1980s he helped to persuade Thatcher to push through the tough 1981 budget, which turned conventional wisdom on its head by raising taxes sharply despite the fact that the economy was in a deep recession. Many in the Treasury objected, as did 364 British economists who signed a celebrated letter predicting that the budget would condemn the economy to a prolonged depression.

The 364 economists were discredited when the budget led the way to the long economic upturn of the 1980s. Walters’s critics had missed the reason to raise taxes – to allow interest rates to be cut sharply. Interest rates are a key driver of UK economic performance because of the huge amount of debt – including mortgage borrowings for houses – dependent on short-term interest rates.

In the late 1980s, Walters, who described the ERM as “half baked”, advised Thatcher to resist pressure from Nigel Lawson, the finance minister, and Sir Geoffrey Howe, the foreign minister, to take Britain in. In 1989, Lawson insisted that Thatcher sack Walters. She refused, he resigned, and Walters went too.

A film about Sir Alan called Sir Alan Walters: An Intellectual Portrait reveals the extent of Walters’s predictive skills. In 1971-72, as an adviser to Sir Edward Heath, he told the then prime minister that within a couple of years he would be faced with 15% inflation, a record current-account deficit and the return of prices-and-incomes policies. Heath told him he was talking nonsense and that none of his other advisers were predicting anything of the sort, suggesting that he should leave. All three predictions were correct and the resulting chaos brought down the Heath government.

In 1990 Walters predicted that the ERM, which Britain was on the point of joining, was heading for a crisis. Two years later, in September 1992, there was Black Wednesday and the near-collapse of the ERM.

As in 1981, Walters is in a minority as few economists believe Europe’s monetary union will collapse outright. But many believe that strains could develop if the left wing governments of the past are replaced by governments of the right and after new and weaker economies are added to the group of countries in the euro.

I guess Sir Alan never imagined the economic boom of the last 16 years could be maintained as long as it was, which is why he predicted 2007. One reason the boom was continually recharged by world governments was to keep the impossible Euro experiment going, and hide from the consequences of its collapse. Had people listened to Sir Alan twenty years ago, the Euro might have been shelved, but after so much time, its collapse will be a worldwide crisis of unimaginable proportions. That doesn’t mean its collapse won’t happen. In fact, the signs are that the coming events are simply unstoppable.

And as key events turn at the point where the political and economic crises are greatest, the history of the world might yet be transformed by the independent spirit of the tiniest member of the eurozone, as pictured at the top of this post.

10 Responses to “The Collapse Of The Euro Area”