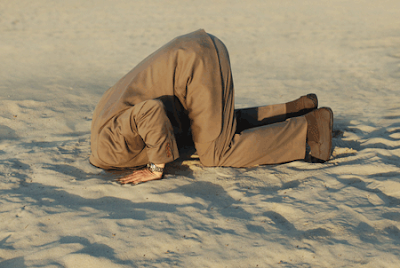 Sometimes political reality is so far from actual reality that a lateral approach needs to be taken. Here I quote an article written by Bill Fox, a long-time currency trader and Senior Bonds Analyst from EWI, who uses strong phrasing to express the picture he holds of the impossibility of the current stance being taken by those who see it as their responsibility to manage the eurozone. In particular he focuses on the comments made by Jean Claude Trichet, Head of the ECB.

Caius Plinius Secundus, (AD 23 – August 25, 79), better known as Pliny the Elder, was a Roman military commander and philosopher; a busy and intelligent man. His greatest legacy was one of the largest written works to have survived to the modern day in its original format: Naturalis Historia, an impressive encyclopedia of the natural world, which established the scientific standard for centuries afterward.

As I watch the actions of Jean-Claude Trichet, the president of the European Central Bank (ECB), I am reminded of Pliny the Elder’s remarks. Despite the rapidly expanding, pan-European deflationary malaise, where the banking systems of Spain, Iceland, Ireland, Greece and Hungary are totally insolvent; where Ireland’s debt-GDP ratio has skyrocketed to 80% year-over-year (with an annualized budget deficit of almost 10%); where the sovereign debts of Greece and Spain have already been downgraded and ratings warnings have been issued for several other countries; where trillions of dollars of asset values have been wiped out; where government tax revenues are in decline and rising unemployment threatens to spill into the streets – against this backdrop, Mr. Trichet was quoted as saying there is “no threat” of deflation in the euro zone.!!!

Under the rules of the Stability pact, the EU member countries must adhere to the guidelines of an annual budget deficit no larger that 3% of GDP and an aggregate debt-GDP ratio of 60% or less. But few in Europe can boast even a positive GDP, while the acceleration of national debt is simply alarming. In the UK, bank and insurer bailouts already have a price tag of £500 billion; the British pound now sits at a 24-year low against the U.S. dollar, while net capital outflows are staggering. Banks in Spain, Switzerland and Italy have been also bailed out or nationalized, and the total costs of the euro zone crisis have yet to be fully realized.

My only confusion is the lack of risk premium priced into current EU debt.

Presently, the German 10-year bond, the European benchmark, yields 3.23%, but Spanish debt only yields an extra 113 basis points (bp). In fact, with the exceptions of Ireland, Greece, Poland and Hungary, the hopelessly indebted nations of Europe are trying to attract foreign money with investment premiums of less that 150 bp over their more secure German counterparts. At some point, investors will demand higher risk premiums, and simply tighter regulations by the ECB will not stimulate foreign capital inflows into a floundering Spanish economy, nor will they inspire the German populace to spend their national gold reserves on bailing out Hungary and Italy.

I strongly believe that further sovereign downgrades to junk or third-world status lie ahead for several European countries. What’s worse, regardless of how “at the ready” Mr. Trichet is to take on the Herculean task of a pan-European reorganization, there is a very real probability of sovereign defaults in 2009. When asked about such a possibility, his response was, “I would totally exclude any kind of hypothesis such as the one you suggest.”
In response, I can only suggest revising Pliny the Elder’s quote to, “True glory consists learning what needs to be done, and saying what deserves to be said.” Mr. Trichet is now attending the World Economic Forum in Davos, where we see a fresh blanket of new snow. As much as he wishes to bury his head in the sand where sand is difficult to come by, we would be happy to deliver a bucket by overnight courier.

It’s not just Trichet who has his head in the sand, Bill. Every trader dealing in the Euro is living on borrowed time, imagining it a single currency and not the bureaucratic and financial nightmare that it truly is. For those who want to get out there is still time, but probably not much more. I’ve done my best to advise people here and in other posts. Don’t hold Euros. If you have to have them, borrow them (if you can).

Any country such as Ireland seeking to reestablish its sovereign credibility could leave its debts denominated in Euros, and relaunch its own national currency, and link that to the US Dollar. The size of the debts would shrink as the Euro shrinks. 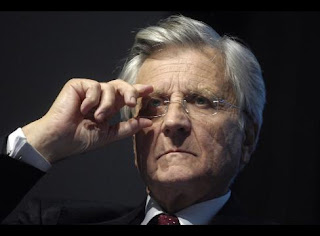 READ TRICHET YOURSELF quoted extensively by the FT from Davos, and decide if he’s got his head in the sand or not HERE

PICTURED – Jean Claude Trichet, Head of the Europan Central bank, head up, eyes forward yet unable to see the possibility of any defaults – the man of the moment.

underlying the anger is a profound sense of frustration because the French, like the other 15 members of the eurozone, are all too aware that their national governments have only limited room for manoeuvre. The one-size-fits-all inflexibility of the eurozone deprives single currency members of the vital weapons of devaluation and monetary policy with which they can at least try to ameliorate the impact of the global downturn. This month the European Central Bank cut interest rates from 2.5 per cent to
2 per cent and its president, Jean-Claude Trichet, indicated that the bank is unlikely to make any further cuts.

That leaves the cost of money higher in the eurozone than in this country (where the Bank Rate is 1.5 per cent) or the United States (where the Federal Reserve has cut rates to 0.25 per cent). Such a straitjacket is exacting a heavy price. The EU’s powerhouse, Germany, is deep in recession with unemployment forecast to exceed four million by the end of next year. At the other end of the scale, the Club Med countries of Greece, Spain and Portugal have all seen their international credit rating downgraded by Standard and Poor’s, which has also put Ireland on “negative watch”.

For critics of the single currency, the test of the euro was always going to come during a bust, not a boom. Now the bust is with us, it is evident that the strains on the currency are becoming unsustainable. Europe’s leaders are blaming the Left for the kind of unrest we saw in France yesterday, and rather more bloodily in Greece last month, but that is too simplistic. The inherent contradictions of trying to run 16 national economies as one are becoming all too apparent. Europe’s political elite may be in denial but the people are not. They realise that the governments they elect no longer have control of the economic levers and the consequences are proving ruinous. With the International Monetary Fund this week forecasting that it will be two years before the world economy resumes growth, it becomes increasingly difficult to envisage the euro surviving intact.

6 Responses to “Junk Status For EU Countries Lies Ahead”