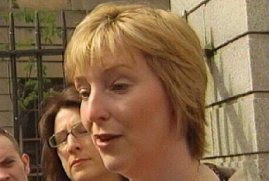 Irish MPs or TDs as they are known are so far up their own arses about their precious Lisbon Treaty that they believe themselves entitled to criticise the Catholic Church for not supporting the EU like craven serfs on this incredibly tedious matter. It’s really laughable to hear the pompous eejits trying to stifle comments freely expressed by Cardinal Brady, for example, as if they are now God’s representatives on this earth – the story told as follows from Open Europe –

Fianna Fáil and Fine Gael TDs have criticised Catholic Primate Cardinal Seán Brady for not publicly supporting the Lisbon Treaty. Fianna Fáil TD Beverley Flynn said, “I think there was an obligation on the church to make a strong statement on Lisbon.” Cardinal Brady said, “A 100 per cent resounding call for a Yes vote, I think, would have got people’s backs up,” adding that people had begun to see the EU in terms of bureaucracy, legislation and economics, rather than in terms of social and human values. “I wonder are we ready for the big step where it’s one, large union now . . . We’re not one people in Europe yet, far from it,” he said. Some of the TDs also urge the cardinal to “take action” against an unofficial catholic paper that had been critical of the Lisbon Treaty.

What action might that be I wonder? Burn the authors at the stake. Have them slung into The Liffey in the middle of winter. Surely if God’s representatives on earth don’t think the Lisbon Treaty is right for God’s flock, they had better say so and carry on saying so. Indeed it is the Fianna Fail TDs who need a good ducking, and bringing down to earth as it were. They clearly see themselves as the new Messiahs.