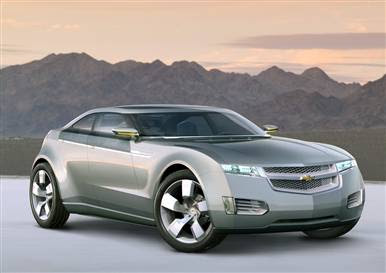 The above title does not resonate with current news reports about the US auto industry where doom, gloom and destruction are all you see and hear. There is no demand for cars, they say. We need a multi-billion dollar bailout, they add. And there is no hope of any other method of survival. Really? I don’t think so.

Let’s get right down to basics.

Ask people what kind of automobiles they want to buy. Then go away and produce them.

And stop producing autos that they don’t wish to buy.

I don’t live in the USA, but I have read many reports going back years stating that Americans would love to buy a particular type of car, which is still not available. They are not available for any technological reason, or physical barriers. Americans are prevented from buying these cars merely by the restrictions placed upon them by government, and the lack of the risk-taking drive that is needed to bring them into being by the industry. See Governments Fear Green Energy.

I am referring of course to electric cars that with lithium batteries can take one or two people to work every day with a range of 40 miles from an overnight recharge, or with an eighty mile daily range if recharging is also made available at work. Some guys have built their own electric cars at home, like Richard, the Olympia, Washington Grandfather talking in the clip below, who is now recharging his home made Volts Wagon using solar power from the roof of his house. If one guy working at home can do the whole thing working by himself, it really cannot be that difficult.

But let’s keep this very simple to begin with so that politicians can follow the logic.

The lithium is available if miners were given clear cut instructions to go and get it in big enough quantities. There are not many locations where lithium can easily be mined, but they exist and need to be developed now as a matter of urgency. There is no point in waiting around for new battery technology which will of course come in time. The market wants electric cars now, and Detroit needs a market.

If there were 100 million electric commuter cars made available in the USA – without them even needing to be hybrid, you could probably sell them in a year as prices would tumble with the volumes and they could be as cheap or expensive as you like. And the energy saving from electric motors driving America, as opposed to the inefficiencies of internal combustion would save another vast wedge of US dollars – not to mention solve a large chunk of the deficit on trade.

The demand pattern for electricity would change and put new pressures on power generation, but as there would so much less gasoline required, that would not present a problem. And if more people take the final step and generate their own electricity from solar or hydrogen, the power companies would find themselves not required anyway.

And that of course is what is frightening big government and big business – allowing consumers the freedom from energy slavery that they crave. But given the financial situation, there is really no option.

It must be the better plan to give Detroit a future than to bankrupt the Federal Government bailing out an industry that refuses to or is prevented from selling what its customers want.

As I said, ask consumers what they want to buy, first. Then go away and get it for them. It’s business ABC for beginners.

PICTURE – The Chevrolet Volt is already in place as a concept car – but as this MSNBC web article says, under current plans, it is not going to be produced for ‘years’. That’s all they have to do now. Shorten years into months and way to go. The problem is that for Detroit to claim its future it has to let go of the past.

They might as well start now and declare to the world..’Gasoline Is Dead. Long Live Detroit.’

EU Competition Commissioner Nellie Kroes gets wind up about subsidising car industries HERE. I suppose Europeans might like an electric car economy too.