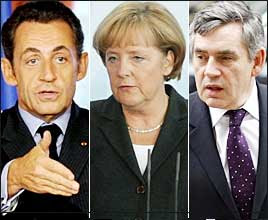 As the dust settles on the ‘British’ bank recapitalisation programme just announced, it becomes more and more obvious that the banks have not been recapitalised but clobbered. Take The Royal Bank of Scotland (RBS) for example. Its current shareholding will shrink to 43% from 100% of the company’s equity overnight. In addition to that the insistence by Brown (= EU) of GBP 5 billion of Preference Shares funded at 12% per annum will require GBP 600 million each year merely to pay the interest. It will be some years before the RBS can turn to the equity market and claim to be anything other than a tortured miserable entity created as an act of revenge by a bunch of communist era bureaucrats bent on bringing capitalism to its knees.

The only route out of the credit crisis is to create optimism, not to reinforce misery. This is not it.

The supposed ‘rescue’ reminds me of the Treaty of Versailles where some imagination about the future might have created a long lasting peace, but instead a new war was made inevitable. In 1918 a country needed to be put back together with imagination, as now an economy needs to be recreated from the bottom up, with all confidence and hope obliterated. The few people in power in 1918 made a right hash of it, as are the current few in Brussels doing the same now.

The banks must be made financially strong optimistic and dynamic, capable of handling the highly risky situations currently to be found in all markets. That means as of now – not in ten years time once they’ve served enough time in financial jail, and suffered enough at the hands of Brussels’ small-minded pen-pushers. Only if banks are set free from their current burdens could they create the kind of scenario which we all desire – one where lending can grow and the credit crunch can end. Now we are being treated to a total irrelevance – the need for half-witted politicians like Brown, Sarkozy, Merkel and Barroso to impose themselves in power over an already critical situation. It will not work.

By seizing 57% of RBS and not 49%, the EU has sent a strong signal to the world that it is not in the business of rebuilding banks but in permanently clobbering them. The EU like the Allies at Versailles is bent on hammering the banks as punishment for the mess they are in – when in truth it is the EU’s regulations that are largely responsible, imposing unworkable accounting practices, limiting the operations of banks, and creating the notorious Basel II framework which generated the sub-prime mortgage crisis and credit crunch in the first place. The banking crisis is above all a failure of regulation, not a failure of trustworthiness on the part of the bankers. The fools who brought us the credit crunch are now showing us that they know exactly how to make it quickly get a whole lot worse.

The Conservatives must vow to get rid of the Preference Shares, and reduce the government’s stake in all banks and financial organisations to below 49% as soon as they win power. A successful economy will not come about unless the banks are strong, confident, liquid and highly profitable. The current situation is a great business opportunity for all with so many people desperate to borrow to get through the current crisis. Many would be willing to pay well above current lending rates for their businesses to survive, but a bank locked in public ownership, hamstrung with exorbitant preference shares is a disaster written in Downing Street – or should I say Brussels. George Osborne, are you listening?

The government should rightly take 49%, and then shower the banks with cheap money and in the process fatten them up for privatisation in a few years time, both the government and the banks making a fortune by having the courage to step in and sort out the crunch now at the moment it needs sorting out urgently worldwide. Only the banks can do that.

The EU is ensuring that banks will be unable to do so, and that shareholders will turn away and buy gold and silver bullion rather than help to rebuild the economy by buying bank shares.

The crisis will now rumble on and get worse. The political pendulum will swing eventually and throw the Brussels bank bashers to oblivion where they belong, like the old French generals at Versailles who condemned another generation to suffer as they had, unable to visualise a future without bitterness and suppression. What a disaster. This is not 1929, where finance failed, but 1918 where politics has.

From Stratfor.com today – the eurozone plan has to be a government process for the approval and disapproval of loans. Since the market is no longer functioning, the decision on who gets to borrow how much at what rate — with a government guarantee — becomes a government decision.

There are two problems with this. First, governments are terrible at allocating capital. Politics will rapidly intrude to shape decisions. Even if the government could be trusted to make every decision with maximum efficiency, no government has the administrative ability to manage the entire financial sector so directly. Second, having taken control of interbank finance, how do you maintain a free market in the rest of the financial system?

ADDENDUM – what price should RSB shares be valued at?

In the good times RBS shares were valued at GBP 5.00 and more. But with the world’s economy looking so shaky, a valuation for the company as things were given some stability might have been GBP 2.50

But with the loss of near 60% of the shares to government ownership through the dilution of the original shares, the optimistic GBP 2.50 becomes GBP 1.00.

That’s before the GBP 5 billion/12% preference shares are taken into account. This measure plus taking into account the likely political interference from EU banking policies, with governments able to choose who gets funded and who doesn’t, must put a big dampener on. The GBP 1.00 becomes 50p.

If the shares can only be expected to rise to 50p unless a major overhaul is to take place in the political arena with the collapse of the EU and the relaunch of British Conservative national government, the uncertainties only compound. In the current climate I would value the shares at around 12.5 pence each, not the 65p the government is underwriting the share offer at.

If the preference shares were cancelled, and the government only demanded 49% of RBS equity, not the 57%, the value would probably be around 50p per share. Brown and the EU could probably get the RBS relaunch 100% privately funded, if they made these changes, but they won’t.

The takeover of the Bank is politically driven, not commercially, or with any consideration to the costs to taxpayers.

My instruction to my broker will be exactly that. Don’t buy RBS unless it hits 12.5p per share as that is all it is worth once the EU have destroyed all the value it contains.

Who knows how many good managers and staff will be driven out in frustration at EU and government interference? By the time the bank breaks free of communist control, it could have become a shadow of its former self, with its client relationships in tatters.

From Open Europe According to the Telegraph, the European Commission has banned banks taking part in Gordon Brown’s emergency bail-out from paying dividends to shareholders for five years. The article notes that “The intervention by Brussels officials threatens to deny investors significant income and could threaten the Government’s scheme.” The article also notes that “There are fears that this stipulation could lead to the collapse of the Lloyds TSB-HBOS merger.” The issue is crucial as banks need to pay dividends to attract private investment. The Government had already set the rate of interest for its own “preference” shares in Lloyds TSB, RBS and HBOS at (an unusually high) 12%, hoping that this would allow the UK to comply with EU competition laws.

However, the Commission has said that this would not be an adequate incentive to ensure banks repay the state as quickly as possible, and stated that the UK bail-out could only proceed if dividend payments are banned until after the preference shares are repaid – which the article notes cannot be done for at least five years. Commission Spokesman Jonathan Todd explained “Initially the UK Government thought the penal interest rate would be sufficient disincentive for the banks. We insisted that the payment of the dividends should be suspended while the state still had the preference shares.”

In an interview with the FT, Adair Turner, the Chairman of the FSA, calls for significant changes to capital requirements for banks. He said that Basel II framework would need fundamental improvements, and could even adopt a “countercyclical” approach to capital requirements. Turner admitted that such a framework would need to be agreed through an “international set of rules”. The Basel II agreement is already implemented at EU level through the 2006 Capital Requirements Directive.

The Economist points to the challenges the EU will face as “a group of countries held together by overlapping pacts of solidarity…Take away the money, and it can start to look awfully fragile.” It notes “A nasty recession will thus have political consequences for Europe. If inflation and unemployment rise sharply, EU solidarity could break down in some damaging ways.”

Jean-Claude Juncker, Luxembourg premier and Eurogroup chair is quoted in the Telegraph as saying “Let everyone remember after this crisis, who solved it. Politicians did, not bankers.”

Jean-CLaude is counting his euro-chickens before they’ve hatched.