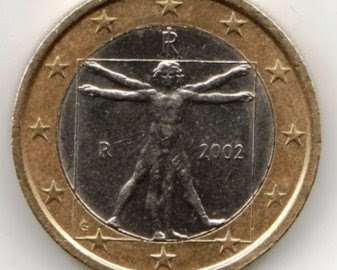 Tim Hedges writing from Italy on his blog (also in Spectator Coffee House) tells us that Italians are considering ‘temporarily’ quitting the Euro. The Italian Euro, with serial numbers beginning with an ‘S’ is heavily weighed down by the Italian government’s stratospheric levels of debt, and costs an extra .5% per annum to borrow compared to German Euros, which have serial numbers beginning with the letter ‘X’. This interest rate gap is rising, creating a growing split of value.

Growth is the lowest in the eurozone. Italy’s debt costs €70bn a year in interest and despite being in the euro it has to pay more than half a percent above what the Germans pay. This spread is widening…

One suggestion has been for Italy to withdraw, perhaps temporarily, from the euro. It could allow the New Lira to decline against the euro (it would be hard to stop it), giving a boost to Italian business and devaluing the debt…

Proponents of the strategy point to the boost given to the UK economy by Britain’s exit from the exchange rate mechanism in 1992, with sterling’s accompanying 20% decline. The difference of course is that post-Thatcher Britain had deregulated and reformed its Labour market. A boost to business via a more competitive exchange rate went straight to employment and growth.

Should Italy leave the euro? Only with a series of strict reforms to make sure it wasn’t just another devaluation. Will it?

Berlusconi is the only person who could take such a step and, in the face of a worldwide downturn, he just might.

The recessionary tide drifting across the continent of Europe is only just beginning if forecasts are correct. With banks unwilling to lend to their customers or each other, the economies of Europe will be hitting periods of lower growth not experienced for decades. The coming months or possibly years will put the Euro through strains that it will probably be unable to survive. Italy, according to Tim, might crack first.