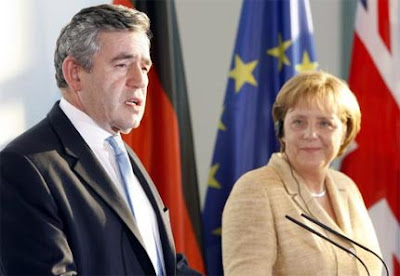 Russia is getting bolder. President Medvedev is raising his pitch to a level which indicates he anticipates success for Russia’s confrontational stance vis-a-vis the West. It must be especially satisfying for the Russians to see a glaring split in the reactions from the different members of NATO. Only America seems capable or willing to countenance a military response to Russia’s encroachment on Georgian territory, while Germany, with its green energy agenda making it so vulnerable, seems unable to think of anything else but preserving her gas imports.

The British Prime Minister is using British Olympic success as a fig leaf to hide his inability to address any serious issue and make a decision, or even issue an effective statement of his viewpoint. Sarkozy offers nothing but words, which the Russians pretend to listen to, before he flies off back to France, when they just ignore him.

Ten years ago the Russians could only dream that a time might come when they could cock a snoop so easily at American military and EU ‘soft’ power. But the EU has so reduced the countries of Europe to a state of blanket non-functionality, that even from her relatively weak state economically, Russia can anticipate successfully overturning the post-Cold War balance of power, and rebuild herself as a substantial competitor for regional power.

The three ‘leaders’ of the largest EU countries are really nothing of the sort. They are all EU-supporting apparatchiks who imagined by dedicating themselves to Big Brother in Brussels, that somehow by combining or pooling their sovereignties, they would thereby become more powerful than if they faced outside threats alone.

Now they are finding out that this is total nonensense, or at least they would be finding out, were any of them capable of facing up to the new reality. In fact all three, Merkel, Sarkozy and Brown are locked into a fixed state of denial. This is the first real test for the EU is facing a serious outside threat and the response so far can only be described as absolutely pathetic, if not risible. 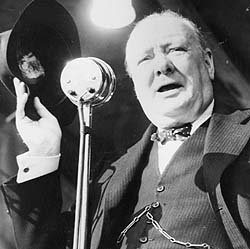 It almost incredible that the continent, once dominated by characters such as Winston Churchill, Charles De Gaulle and Konrad Adenauer, is now so reduced by the throttle of corruption, lies and bureaucracy that our combined futures depend on people of the level of Gordon Brown, Angela Merkel and Nicholas Sarkozy.

Bush still apparently cannot believe that the EU is congenitally completely incapable of defending itself. American policy towards Europe was predicated on the assumption that locking the countries of the EU together would, firstly prevent them from fighting each other, and then secondly enable them gradually to assume responsibility for their own defence, relieving the USA of the burden.

The countries of Europe would have been most unlikely to re-engage in warfare after 1945 with the Soviet threat linking them together in fear, until the Berlin wall came down. Since then, economic growth has made warfare a most unattractive option for modern economies. The EU has not been the critical factor in keeping the peace in the past, but it is fast becoming the strategic weak link which might well cause warfare in the future.

As for managing to get the Europeans taking defence seriously, the EU has achieved exactly the opposite, with defence expenditure reducing in proportion to the sense of national responsibility that the EU has engineered in all its member states.

The moral contract offered by the EU to its members has always been to tell European countries to abandon national thinking and identity, for which the reward will inevitably that there will never be any need to go to war again. Russia has blown these ‘soft’ assumptions to pieces with its invasion of Georgian territory. Russia has maintained a strong sense of national identity throughout, and now has a great military advantage in being able to motivate its army and its citizens to take part in and support invasions of other countries.

The same larger European countries that should be standing firm against Putin’s aggression, and which have been busy humiliating Russia, have allowed their own national integrity and identities to be dismantled, making decisive national action nigh impossible.

In the past, of course the Europeans would begin the wars, and the Americans would be forced to come to the help of the British and the French. This time the story’s happening the other way round. The British and the French, joined by their former foe Germany, have all abandonned their sense of national identity, and are expecting the EU to bring about the decisive actions that are required. The problem is that the EU has dismantled the ability of nations to act, but has built no army and military capability to replace them. Putin cannot believe his luck.

When eventually the Americans take on board the lessons of this crisis, they will see that the EU has become an organisation guilty of gross dereliction of its responsibility to its member countries and its citizens.

Such a state of hopelessness is unthinkable to Americans, which is why they cannot see and understand what is going on in Europe.

Russian President Dmitry Medvedev yesterday raised the stakes in the Georgia crisis with his decision to recognise the breakaway republics of Abkhazia and South Ossetia. “We are not afraid of anything, including the prospect of a Cold War,” he said.

The US has said that its humanitarian aid mission to the port of Poti would also have a military element. A US diplomat in Tbilisi announced that two guided missile warships would be docking at the port despite the Russian military presence. Mr Medvedev accused the Americans of trying to smuggle weapons into Georgia.

President Saakashvili of Georgia described the Russian declaration as an annexation, and accused Moscow of seeking to provoke renewed fighting that would allow Russian armoured divisions to move around Tbilisi, the capital, and wipe Georgia off the map. Saakashvili told the Times that Russia was trying to build up forces near Akhalgori, only 32km from Tbilisi. From there, he said, they could control the hills around the capital in the same way the Serbian forces ringed Sarajevo in the Bosnian war. Asked if he feared a fresh Russian invasion, Mr Saakashvili said: “If there is no strong reaction from Europe, at any moment.”

EUobserver notes that in an interview on France’s LCI channel, Russian President Medvedev dared the EU to impose diplomatic sanctions at next week’s EU summit. “If they want a degradation of relations, they will get it,” he said. “The ball is in the European camp.” On the Arabic Al-Jazeera network he spoke of using “military means” against a future US missile base in Poland.

French Foreign Minister Bernard Kouchner accused Russian troops of “ethnic cleansing.” Germany continued to sound a calmer note throughout the day, indicating that suspension of EU-Russia treaty talks is not on the cards. “We will not solve conflicts if we do not talk to each other,” Chancellor Angela Merkel said on a visit to Lithuania. Ms Merkel’s visit to the Baltic states and Sweden is aimed at promoting a new Germany-Russia gas pipeline – Nord Stream – which Germany calls a “strategic European project,” but which the Baltic states fear will strengthen Russia’s energy leverage against eastern European countries.

UPDATE – Dan Hannan and EUreferendum are both demanding a return to an independent foreign policy for Britain.