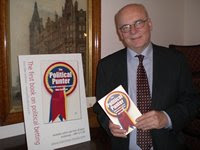 The brilliant mind of Mike Smithson, the well-regarded producer of www.politicalbetting.com, seems to have one or two blank spots. For example, he never wavered from his forecast that the YES side would win the Irish Lisbon referendum, and did not pick up on any of the web chat which was indicating a shock upset,weeks before the vote.

The betting story around the Irish referndum was also very odd with Paddy Power keeping its odds showing the YES side was a sure-fire winner, even going on to pay out the YES side as winners, even after they lost!!! If anyone can explain such a departure from the normal practices of betting businesses, I’d be most grateful. It makes you wonder if the bizarre behaviour of Paddy Power’s betting odds confused Mike Smithson into the bargain, getting him to make a rare error in forecasting the result of a national poll.

One might at the same time draw the lesson, however, that when it comes to any business organisation putting out information about the EU, truth is not necessarily going to be very high on the agenda, but instead the aim might be pleasing the powers that be.

The polling organisations are businesses too, no doubt with a sense of political survival of their own – and are not, it seems, beyond sending out barmy signals as regards polling results concerning the EU and its support amongst the public.

IPSOS Mori, for example, are reported by Smithson as publishing a poll showing that 97% of the British public don’t care one way or the other about the Lisbon Treaty – or as Mike Smithson so graphically expresses it in a post comment yesterday – ‘they don’t give a shit’ about it!

Open Europe show that 85% of British people want a referendum on Lisbon, and so it appears from that source that they do ‘give a shit’. Ipsos Mori might be doing a Paddy Power, giving out total nonsense to keep on the right side of totalitarian power in Europe, which has enormous powers of patronage through its various networks.

It seems that the more brilliant the mind, the less able it is to see through the evil of propaganda. As they used to say in the village where I grew up,

Or at least that is the most charitable explanation I can see for Smithson’s apparent EU blind spot.

Just a word on Lisbon and the EU – the latest MORI issues index shows that the proportion who care about this has dropped even further.