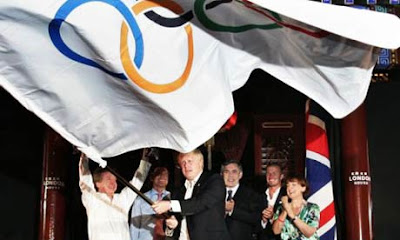 If this photo can appear showing the happy scene at the British Olympic launch party just before Boris”Ping Pong Is Coming Home’ speech with the whole party visible, how come the BBC managed to film the whole of Boris’ speech with all the other people on the stage not in vision – bar Seb Coe awkwardly positioned behind him and Lord Colin Moynihan off to Boris’ right? See below video.

I’ve nothing against Colin Moynihan, but if there was room for two faces to be filmed at this historic moment, surely it was the face of the Prime Minister that should have been in camera shot.

The smiles from Tessa Jowell, Gordon Brown and Seb Coe don’t look all that relaxed, to be honest, while Colin Moynihan and David Beckham, on the other hand, look like they’re having a blast.

Brown was no doubt completely underwhelmed being upstaged by Boris, and the BBC had been requested not to keep him in camera while Boris spoke to billions around the world.

See below how Brown and the others were kept out from the BBC camera angle, creating a most unnatural result. David Beckham was made invisible throughout the whole scene.

Why? I think we know why.