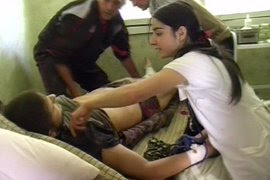 Amazing as it may seem, Britain has been at the forefront in wrecking the diplomatic efforts being made to stop the war in Georgia. Backing the Americans yet again, they insisted that an agreement banning all use of force in resolution of the dispute in South Ossetia, should not be allowed to go ahead.

The British have no place being involved in this. They are again acting as the mouthpiece of the EU, taking no account of Russian power and sensibilities. The Russians have been humiliated in Kosovo, and they have stated clearly and openly ever since that they will not ‘let matters rest’ and that if secession is OK for Kosovo, then it’s also OK for the secessionary movements it supports on the edges of its former empire.

The fact is that if the Kosovo decision is being enforced in Europe by the EU, the Americans and the Europeans cannot insist that Putin has no business attempting similar results in the Caucasus. Britain should be advocating the cessation of hostilities, and the Georgians will have to accept the bitter loss of South Ossetia, just as the Serbs are being forced by the Americans and the EU to accept the bitter loss of Kosovo.

Or the EU should get out of Kosovo and allow the Serbs to govern their own territory. They cannot have it both ways. Britain, in particluar,is acting like a spoiled child always used to getting its own way.

You cannot have one rule for the EU, and another one for Russia. Putin is quite right. And Britain has no business fanning the flames of war.

the United Nations Security Council failed to agree early on Friday on a statement drafted by Russia that would have called on Georgia and South Ossetia to immediately put down their arms.

“The Security Council is not yet in a position to express itself on the situation,” Jan Grauls, the Belgian ambassador and the council president for August, said.

There were no immediate plans for the council to take up the matter again.

The council concluded it was at a stalemate after the US, Britain and some other members backed the Georgians in rejecting a phrase in the three-sentence draft statement that would have required both sides “to renounce the use of force”, council diplomats said.

It seems the New Labour EU-loving war-promoting machine drives ever onwards. One day Britain will pay the price. The centre of gravity of the world’s power is moving eastwards to newer more successful parts of the world. The Americans under Bush and the Europeans adrift inside their totalitarian EU just cannot handle it. It seems a bit unfair that yet more innocent lives have to be sacrificed to preserve Western arrogance and unreality, as their power ebbs ever further away.

EXTRACT – Russia is asking for trouble in Georgia

Mighty Russia, population 150m, and tiny Georgia, population 4.6m, its former colony and now fiercely independent neighbour, are in terrible danger of blundering into a bloody and pointless conflict in the Caucasus. It would sorely damage relations between Moscow, the European Union and the US. It could also destabilise the rest of the Caucasus region. Washington and Brussels can urge restraint, but the only country that can stop the nonsense is Russia itself.

As Richard North says on eureferendum.com, all the hot air pourring out of Brussels (and its media supporters such as the FT) is unlikely to trouble Putin very much.