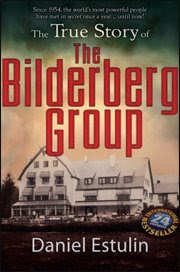 Watch the guy who wrote the most recent book on the Bilderberg Group talking about his subject on CNN (not Daniel Estulin incidentally who also wrote an earlier book on the secretive group pictured above). The new author’s views, like Estulin’s, are consistent with them possessing an arrogance which permits them to ignore democratic accountability, promote transnational organisations like the EU, recruit politicians into powerful positions and build a one-world-government.

Is this the organisation which is encouraging Hillary to keep fighting Obama? It would be in the interests of the Democratic Party for her to stop and concede the nomination. What do you think?

If it is true that the Bilderberg group is acting as a national leader appointments bureau (as alleged by the author in the video) then Obama would rightly be attempting to reduce the Bilderberg Group’s influence, and to return power to national level in the USA…or otherwise win their approval by showing himself unbeatable by Hillary, who clearly enjoys BIlderberg support.

UPDATE – It looks like the Bilderberg is too powerful to be denied entirely….and that Obama and the Bilderberg have at last shaken hands. But will the collapsing Bilderberg world of control through financial and news manipulation be at the point of collapse with the credit crunch exposing the folly of the powerful who allowed credit and other risks such as derivatives and swaps to surge to uncontrollable levels? Will the secrecy enable them to escape the blame for the mess they have so arrogantly created?

One Response to “Is The Bilderberg Group Out To Stop Obama?”