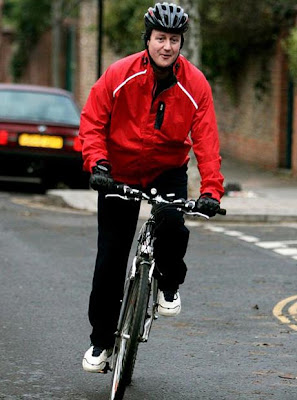 There ia a battle going on is for control of the Conservative Party. As in all battles there’s ploy and counter ploy. If you adopt a literal interpretation of what you see, hear and read, it is most unlikely that you are seeing the true relevance of many of the events taking place. I am suggesting that eurosceptics have what they want in place – as regards Cameron being leader.

The opposition to Cameron is partly people who wish to manoevre him rightwards as it were. And there is the europhile media who have cottoned on to the fact or fear that Cameron is not acting as the europhile or at least the eurocompliant he was intended to be, when they campaigned for his coronation.

The eurocompliant media can feed their campaign against Cameron, which is intended to fracture the Conservative vote and stop Cameron winning power, by taking the lines from those like Christina and Sean Fear on Conservativehome.

If such traditional Conservatives realised that Cameron was actually on their side, but he’s involved in a deadly power game on which Britain’s future rests, they would not be writing as they are. The eurosceptic vote is too easy to fracture – UKIP, BNP, many smaller parties and also stay at home and Green. The only way to actually get out of the EU is to back Cameron, although he will not say the words EU once, or he’s dead meat, and the eurocomplaint wing of the party that has the media onside will devour him. They are angry enough at his silence, and non-attendance at EU meetings. It is tragic that Tory right-wingers don’t realise how good Cameron is as regards being ‘one of us’.

They’re used to Blair. Cameron pretends to be a Blair to get media support, but in fact he has other ideas and is nothing like a Blair. He’s used the ‘I’m the next Blair’ cover story to grab the media backing needed for his coronation, and to get this far. He will need your support to get much further. Traditional Conservatives should give this a bit of thought.