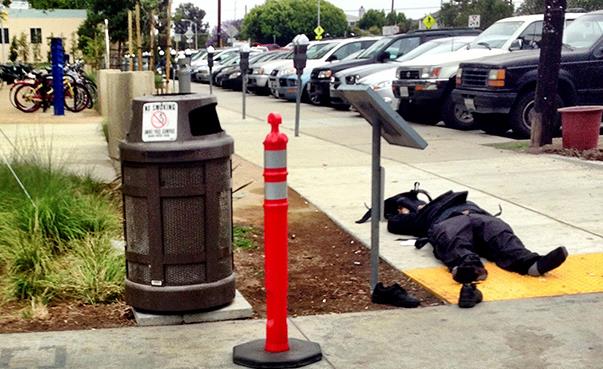 Once again, we have a shooter who takes aim at innocent civilians, dressed in all black BDU’s, like VA Tech,

Giffords AZ Shooter, Aurora Theater, Newtown School. Also, there were reports of second and third shooters,
different weapons used, inconsistant casualty counts, secrecy surrounding the shooters identity, etc…
But I will show some proof of inconsistancies and just plain bizarre police explanations.
The first is, the ‘evidence’ the police have shown.
Here are the weapons supposedly used.
The pistol, anybody familiar with guns, is a blackpowder pistol. The rifle is missing the the stock, bolt and everything but the barrel. Also, the box shown, is a muzzleloader box that you get when you buy a kit…
Second, the shooters shoes.
First, we show an completely out of focus video surveillance image, where the face is blurred out, but we can make out what appears to be his boots.
Those boots appear to be consistant with the next image, where we see a single boot, an ammo belt, and some blood.
That is a standard miliitary/swat issue boot (unique tread pattern). But in the next image, we see the deceased shooter, with his shoes removed (why, who knows).
Clearly, different shoes!. Note the socks are military issue, and no kneepads.
Also, the cops said they shot and killed the shooter inside the library, but here is his body, laying on the sidewalk, with no medical people attending, or any visible blood. Infact, I can’t find one image of any medical people even looking at the shooter. This guy was obviously not supposed to survive.
http://beforeitsnews.com/alternative/2013/06/santa-monica-appear-to-be-another-false-flag-2677394.html
The Tap Blog is a collective of like-minded researchers and writers who’ve joined forces to distribute information and voice opinions avoided by the world’s media.