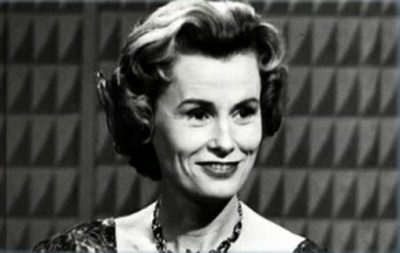 LADY ISOBEL BARNETT
When any broadcaster started work for the BBC a background security check was always part of the course, such things as political loyalties a criminal record and sexual preferences were always looked at, but in the thirties several of the Cambridge traitors called the Apostles  all worked for the BBC,  all had suspicious political views, almost all had convictions for alcohol related incidents or  for immoral homosexual acts in public toilets,  but got in with a note of recommendation from lord Rothschild, in 1942 the BBC was run by RV Foot and Cecil Graves who were left leaning  pro war and pro Rothschild activists, there was a very informative document in the intel files some years ago by Raoul Berry  who was a BBC linguist who worked with the Cambridge traitors and warning of his suspicions about them politically and not trusting them  with boys, so the present problems at the BBC is nothing new, called by British servicemen during W W II as “Bullshit time ”  the arrest of entertainer Rolf Harris being the latest BBC celebrity acused of sex crimes against children.
Lady Isobel Barnett one of the most recocnisable faces of BBC TV in the sixites and seventies was one of the most popular celebs ever to grace the small screen, with her perfect upper class accent she was the epitome of the English aristocratic lady, Isobel was born in Aberdeen Scotland and became a doctor of medicine before giving this  up to become a JP ( justice of the peace ) which admirably suited her very moral  tone on TV programmes such as Whats my line Petticoat Lane Many a Slip and Any Questions, with her beauty and engaging replies she was everyones favourite personality .
But Isobel was a very unhappy woman and she complained to bosses at the BBC that as a doctor and a judge she could not continue to countenance the behavior of certain people at the BBC who were turning a blind eye to sexual promiscuity and deviance and what she described as sexual attacks on young boys sometimes actually at the BBC studios, she went on that if it came out that TV people were turning a blind eye to abuse on programmes like Dr Who and Ready Steady go etc it would damage her work and reputation.
Now one of Isobels fellow contestants was a very clever blunt intelligent and incisive homosexual  called Glbert
Harding who was at one time characterized in the tabloid press as “the rudest man in Britain”  for his cutting attacks on the TV show making it compulsive viewing.
Harding a  very generous man with his time and money was the subject of an extremely tough series of questions which ended with Gilbert Harding in tears after being probed about the death of hs mother by John Freeman on the Face to Face programme where he wanted Gilbert Harding to confess his homosexuality , Freeman later publicly expressed regret about this line of questioning,  a few weeks later Gilbert Harding directly after recording a radio programme collapsed during an alleged asthma attack and died outside Broadcasting House, he was 53-years-old and his homosexuality was now all over the newspapers.
Lady Isobel Barnett could no longer stay silent and wrote to the BBC and a copy was sent to her husbands solicitor
in which she said the BBC was a cess pit of debauchery, and was like a private club for boys to do other boys and it had to stop. or she would speak out.
Lady Isobel Barnet had been talking to fellow panellist Barbara kelly about  setting up a new movement for childrens rights with a hotline phone for immediate help, Barbara Kelly’s husband was broadcaster Bernard Braden whose show ” On the Braden Beat” had some of the biggest viewing figures of any show, the idea was stolen by Esther Rantzen and renamed “thats life” Esther was also later to set up an organisation for childrens rights with  phone numbers for immediate help called “Childline “
One of those people fingered to the pro Jewish BBC By Isobel Barnett  was the former Irgun terrorist Menachem Begin, described by Rabbi Louis Jacobs at a Cold war lecture  as a psychopathic  rapist and murderer of small arab boys, Begin was planning a  series of bomb attacks on London which was to be blamed on Egypt.
Within days Lady Isobel was dropped from all her BBC TV and radio work, vicious rumours began circulating that she was a has-been, had lost it and was suffering dementia, and then finally she appeared in court charged with stealing a tin of fish and a carton of milk worth 87 pence, she was fined £75, a criminal record meant all her careers were over and two days later on the 19th October 1980 she was found dead in the bath at home.
During Britian’s industrial troubles Intercepted phone calls with London KGB operatives questioned whether Lady Barnetts death was suicide or a death to silence a lovely lady who only wanted to clean up the BBC
T Stokes London
The Tap Blog is a collective of like-minded researchers and writers who’ve joined forces to distribute information and voice opinions avoided by the world’s media.