You’re kidding, right? It’s a web crawler, you can never expect the dates to be correct. Are you really going to rely on the search results date?
Note that ALL of these links are to photo galleries, which are dynamically loaded pages. The page may have been INDEXED (crawled, IP stored) a day early, but the photos were added day of, and the titles loaded as you searched.
5:31 pm

That explains it! I learn something new every day, and will be asking even more dumb questions tomorrow. That’s how to keep learning, in fact.

How about all the other factors – such as the usual drill pre-terror event? On the same day, with news blanketed, Obama passed into law 23 gun control measures. It reeks of false flag regardless of my ignorance about search engines. 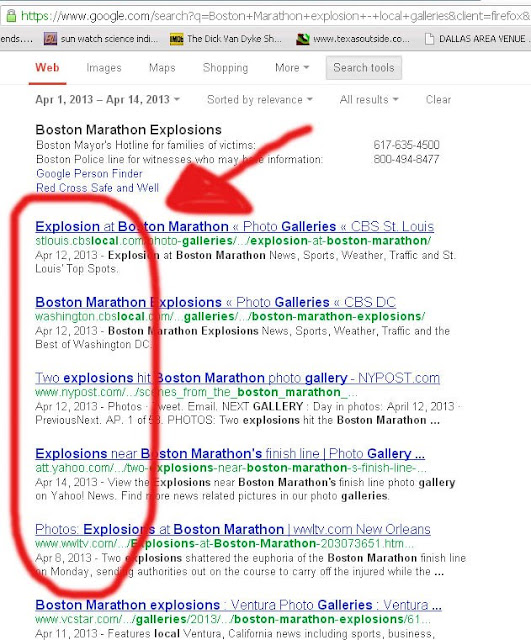 Bomb squad was running “controlled explosion” on the same day

What’s not yet being reported by the mainstream media is that a “controlled explosion” was under way on the same day as the marathon explosion.

As the Boston Globe tweeted today, “Officials: There will be a controlled explosion opposite the library within one minute as part of bomb squad activities.”

Some people believe this explosion might have been part of the demolition of another bomb. It seems unlikely, however, that a bomb at the library, one mile away, could be so quickly located and rigged to be exploded by the bomb squad in less than one hour following the initial explosions at the marathon.

Furthermore, according to Local15TV.com, a University of Mobile’s Cross Country Coach said there were bomb-sniffing dogs at both the start and finish lines, long before any explosions went off. He said:

Bloomberg news is now saying, “This is very likely a terrorist attack.”

The question is: Who are the terrorists? It’s far too early to take an informed guess on all this. However, it is indisputable that the FBI is actively engaged in carrying out bomb plots in the United States, then halting them at the last minute to “catch the terrorists.” This fact has been covered by the New York Times, among other publications.

Keep in mind I am in no way blaming the FBI for this. Most men and women who work with the FBI are upstanding citizens who would be appalled at such acts. But it is theoretically possible that one of the FBI’s many “terror plots” went too far and turned into a live bomb instead of a dud followed by an arrest for “domestic terrorism.”

Either way, terrorism always works in the favor of the state. It makes presidents look presidential, and it gives the government an excuse to crack down on civil liberties all across the country.

Be wary of who ultimately gets blamed for this, especially if it’s a veteran or patriot. 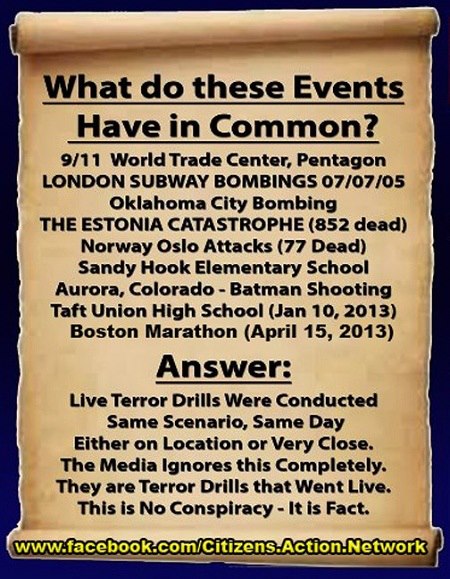 13 Responses to “How come Boston bombing was reported a day early?”