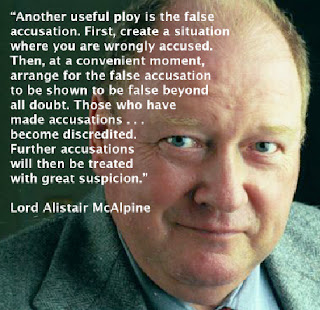 From Garry Green, from McAlpine’s book The New Machiavelli – The Art of Politics in Business
Toad Hall sends –
Lord McAlpine on How To Deal With The Media: “Another option is for the businessperson to learn the art of dealing with the media, using all the tricks that go with that trade – such as the false defeat: when a person seems to lose, in order to gain public sympathy, or the false triumph: where a person seems to win in order to appear strong – thus giving credibility to any number of dubious propositions that person may wish to make in the future. Neither of these ploys are examples of the use of true facts, rather of false facts given to the media to chew on, much as a dog chews on a bone. Another useful ploy is the false accusation. First, create a situation where you are wrongly accused. Then, at a convenient moment, arrange for the false accusation to be shown to be false beyond all doubt. Those who have made accusations against both the company and its management become discredited. Further accusations will then be treated with great suspicion. Always remember that people’s memories are very frail, remembering only both the high spots and the lows of a person’s career, and then seldom remembering accurately. People believe in the facts that it suits them to believe.”
http://www.amazon.co.uk/Machiavelli-The-Art-Politics-Business/dp/0471350958/
TAP – MacAlpine’s right.  The problem for Steve Messham going on TV to accuse the people who abused him is that the public would prefer it all not to be true.  The media controllers know that, and can easily remove the subject from the airwaves without any outcry resulting.  The problem is that the people who govern our country are invariably paedophile and Satanists.  Only can such people be guilty of such unrelenting evil.
Macchiavelli also said something else about being in a position of power –  that Princes should not mess with the women and children of the people they have power over.  It always backfires eventually.  That is something that powerful people in Britain seem to have overlooked.
Messham wrongly accused Lord McAlpine, as he had made an error in identifying him.  Steve Messham has indicated that Lord Alistair McAlpine was not the one that raped him etc, but possibly another Lord McAlpine, or another McAlpine.
THE SLOG
DAVID ICKE HEADLINES TODAY
Please Tweet (and get others to Retweet) the following:
I hear that Lord McAlpine is the man that Steve Messham named in an unbroadcast part of his interview with the BBC. #McAlpine #DavidIcke
It has the benefit that not a single word of this statement is not true or can be challenged as not being true or is libellous in any way because it is all in the public arena.


“I don’t even have a phone…… I’m surprised [Newsnight] didn’t call me, I was expecting a call” « Hang on a minute! #c4news
From a tweet.
TV interview with Lord McAlpine.
The Tap Blog is a collective of like-minded researchers and writers who’ve joined forces to distribute information and voice opinions avoided by the world’s media.

12 Responses to “Alistair McAlpine on how to defeat your accusers”