I checked with my new neighbours if they were aware the sky was being chemtrailed yesterday.  I found that one or two of them did know.  That was quite pleasing, as a year ago, no one seemed to have the first idea.  This came in from comments.

COMMENT –
Anyone else been battered with chemtrails this morning? 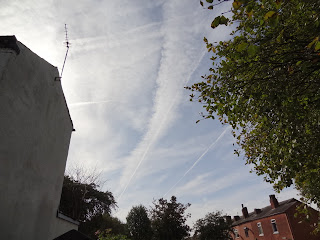 Was out at about 10am to get stuff from the supermarket and there was 4 planes doing parallels/flybys. Sky looked like a game of noughts and crosses gone badly wrong.

Nice hot day expected today. Lots of people will be out enjoying the sun. They’ll be breathing in some nice aluminium and barium rotting their lungs away too… yummy.

Got some pics although couldn’t get home fast enough to get camera so some of the trails have dispersed a bit.

I suspect it’s been particulary heavy today over London due to the Paralympics closing ceremony later today. Chemtrail in the morning, and the chemtrails lie in the air all day for people to breathe in is the usual script.

5 Responses to “More people are becoming aware of chemtrails”