Hi Tap, here is something a bit different I think you will like, as you will soon be reciting that well known Nursery Rhyme to your New Junior, just like I did to all my kid’s many years ago. My interpretation of it has always been that the preferred state in Nature is towards attaining Maximum Entropy, {CHAOS}, so I was interested in this article by Edward Gold Berg, as it doesn’t take a
Quantum Leap in The Thought Process to realise the analogous situation between
our Friend The Egg


does it mention he is an egg. )
Then as a Follow on  Sidelining of The $ by Kosuke TAKAHASHI(TAP – Apologies for the messy copy.  Google’s not behaving this morning. 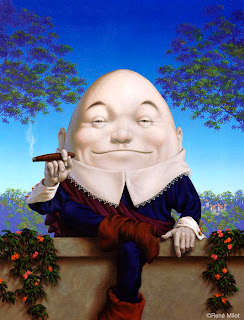 For the leaders of autocratic states in the age of technology and social media who won’t open their societies are Humpty Dumpty. Once technology and social media upturn a society, all the king’s horses and all the king’s men can’t put the old society back together again.
In America and Europe these same forces have created a new governing paradox. In this paradox the old rules of political leadership and coalition building have changed. The technology that drives market integration/contagion and Globalization demands more centralized political leadership to deal with the socioeconomic changes created by Globalization. While at the same time technology gives individuals and groups more power to question leadership. This paradox has magnified our famous political gridlock. What saves America of course is democracy with its built in ability for citizens to vent and thus alleviate pressure on the system.  { “DEMOCRACY” – Do they know what that is then ?}
We are not only living at a time in global relations where the paradigms of what constitutes power and action among states has shifted but where the speed of change has not allowed new strategies to evolve to deal with these changes. —–
While the international system of safe guards and response mechanism to international crisis relies primarily on World War II concepts of aggression and state power. Even the few economic safeguards set up after World War II such as the IMF and the World Bank were established not to deal with problems of mass economic contagion but with payment imbalance primarily among weaker economies and the elimination of poverty.
Compounding the question of what constitutes power among states is the re-birth of state capitalism; a corporate construct that has the ability to combine the power of the state with that of the corporation.
Governor Romney proudly announced at the CPAC meeting that he was for capitalism. But to blindly be for capitalism in today’s world implies that one still lives in a world where Marxism is the competition. A world where Nikita Khrushchev’s words that our grandchildren will live under Marxist Socialism still resonates   ——-
The issue is not whether one is a capitalist or not, most of the world today would say they follow some variety of capitalism.  ——
We are in a world where globalized markets can be severely destructive, where technology can destroy kings, and where new forms of capitalism pervert the competitive advantages of the capitalist system to innovate and create growth. Yet at the same time the age-old problems of nationalism, and ethnic and religious rivalry still percolate.
With the world in this period of extreme flux, when traditional views are as secure as Humpty Dumpty, the Republican Presidential candidates are not focusing on how these issues affect the United States ——-
They don’t even appear to comprehend that in a globalized world there is little separation between domestic and international issues and initiatives. Instead they are busy acting like medieval philosophers; slightly changing the argument however from how many angels can dance on the head of a pin, to what is the difference between Romneycare and Obamacare?

Japan and China Bypass US in Direct Currency Trade

Kosuke TAKAHASHI
Japan and China started direct trading of their currencies, the yen and the yuan, on the inter-bank foreign exchange markets in Tokyo and Shanghai on June 1 in an apparent bid to strengthen bilateral trade and investment between the world’s third- and second-largest economies.
Direct yen-yuan trades also aim to hedge the risk of the dollar’s fall in the long run as the world’s key settlement currency and as the main reserve currency in Asia, the world’s economic growth center in the 21st century. By skipping the dollar in transactions, the region’s two biggest economies indicate their intention to reduce their dependence on dollar risk and US monetary authorities’ leeway and prowess on the Asian economy. The move aids China’s goal of undercutting US influence in the region while strengthening China-Japan financial ties. 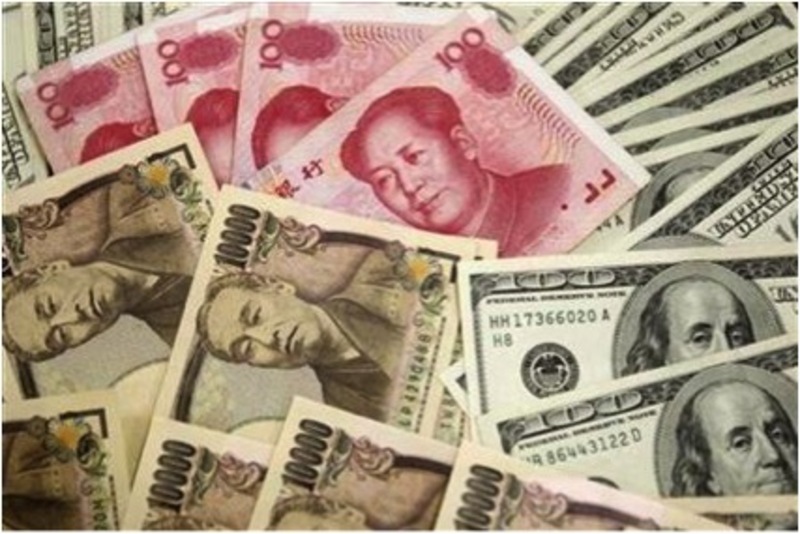 This is the first time that China has allowed a major currency other than the dollar to directly trade with the yuan. For Beijing, this new step brings benefits of further internationalization of the yuan. For Tokyo, direct trading confers a favor of incorporating China’s dynamic growth more effectively and economically. The possible future correction of China’s still artificially undervalued yuan may also result in a weaker yen, boosting the competitiveness of Japanese exporters such as Toyota and Sony in the long term.
Japan’s three megabanks – Mitsubishi UFJ Financial Group, Sumitomo Mitsui Financial Group and Mizuho Financial Group – all began direct yen-yuan trades with major Chinese banks on June 1. Exchange rates between the yen and the yuan are determined by their transactions, delinking the current “cross rate” system in which the US dollar intermediates in setting yen-yuan rates.  ——
Bypassing the dollar
Up until June 1, Japanese and Chinese firms had paid currency conversion fees twice in trade and other bank transactions. Japanese companies first had to convert the yen into the dollar, then they exchanged the dollar for Chinese currency. For Chinese firms, it was vice versa. With this removal of the interim step by skipping the dollar in transactions, many expect cost reductions.
Japan ranks fourth among China’s trading partners after the European Union, the United States and the 10-country Association of Southeast Asian Nations (ASEAN), while China has been Japan’s largest trading partner for the past three years.
The total share of China and Japan in the world’s combined gross domestic product (GDP) was 19.9%, based on purchasing power parity (PPP), according to the IMF World Economic Outlook Report published in April 2012.

Bilateral trade rose 14.3% year-on-year to reach US$344.9 billion in 2011, hitting a new record for the second consecutive year. China accounts for about 20% of Japan’s world trade value. Around 50% to 60% of that is being settled in dollars, with less than 1% of it settled in yuan. One Chinese news outlet has estimated direct yen-yuan transactions will realize $3 billion in cost savings.

Internationalization of the yuan
For China, this is a step in its moves to internationalize the yuan, accelerating the currency’s wider use. More than 9% of China’s total trade was settled in yuan last year, up from only 0.7% in 2010, according to Xinhuanet. ———

Should China shift to a limited floating exchange rate system, the yuan will likely appreciate against major currencies such as the dollar. Japan’s business with China expanding and the growing presence of the yuan in Japan’s international trade will push down the yen’s effective exchange rate against major currencies. Annual trade between China and Japan more than doubled in the past 10 years, reaching $346.6 billion in 2011. In the first four months of 2012, Japanese foreign direct investment in China rose by 16% to $2.7 billion from one year earlier.

REGARDS  ………..  WASP
The Tap Blog is a collective of like-minded researchers and writers who’ve joined forces to distribute information and voice opinions avoided by the world’s media.

4 Responses to “Nothing In Humpty Dumpty Says He’s An Egg…Maybe He’s The US $.”