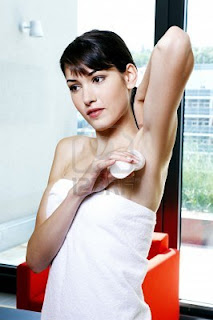 New research examining parabens found in cancerous human breast tissue points the finger at antiperspirants and other cosmetics for increasing your risk of breast canceri.
The research, which is also reviewed in an editorial published in the Journal of Applied Toxicology, looked at where breast tumors were appearing, and determined that higher concentrations of parabens were found in the upper quadrants of the breast and axillary area, where antiperspirants are usually appliedii.
Parabens are chemicals that serve as preservatives in antiperspirants and many cosmetics, as well as sun lotions. Previous studies have shown that all parabens have estrogenic activity in human breast cancer cells.
Another component of antiperspirants, aluminum chloride, has been found to act similarly to the way oncogenes work to provide molecular transformations in cancer cells. According to the authors of the editorial review, the research shows “signals of concern that such compounds are not as safe as previously generally considered, and further research is warranted.” Furthermore:

“The data from this latest study, the most extensive examination of parabens in human breast so far published, confirms previous work and raises a number of questions on the entire parabens, personal care product and human health debate, particularly relating to the source and toxicological significance of the paraben esters.”

The featured study by Barr et.al. discovered one or more paraben esters in 99 percent of the 160 tissue samples collected from 40 mastectomiesiii. In 60 percent of the samples, all five paraben esters were present. There were no correlations between paraben concentrations and age, length of breast feeding, tumor location, or tumor estrogen receptor content. The median values in nanograms per tissue for the five chemicals were:

While antiperspirants are a common source of parabens, the authors note that the source of the parabens cannot be established, and that 7 of the 40 patients reportedly never used deodorants or antiperspirants in their lifetime. What this tells us is that parabens, regardless of the source, can bioaccumulate in breast tissue.
And the sources are many. Parabens can be found in a wide variety of personal care products, cosmetics, as well as drugs. That said, it appears the dermal route is the most significant form of exposure. In the featured editorial, Philip Harvey and David Everett explain why:

“… [T]he dermal route of exposure is considered more plausible when intact esters are detected, and other authors reporting human exposures and body fluid concentrations of paraben esters consider cosmetics of some form or another as the likely sources… This is because the metabolic esterase activity of the gut and liver (relevant to oral exposure) is considered to greatly exceed that of the skin, and oral exposures would result in rapid liver metabolism of the esters to produce the common metabolite p-hydroxybenzoic acid… Paraben esters typically used in cosmetics pass through human skin in vitro/ex vivo, and Ishiwatrai et.al. (2007) has shown persistence of unmetabolized methylparaben in the skin”

Safety of Parabens has NEVER Been Established…

As incredible as it sounds, despite the fact that parabens are used in such a wide variety of products, the toxicology of these chemicals has barely been investigated. There is a complete lack of modern toxicology studies on these ingredients, and according to the featured review, not a single study on the chemicals’ carcinogenity follow acceptable regulatory standard carcinogenity study protocols.
The authors point out that one rat study from 1956 is still used as “the pivotal evaluation upon which human safety is judged!”

“This may be acceptable for certain chemicals for which there is limited human exposure but not for chemicals such as parabens for which such a large population is exposed, and which show significant tissue concentrations,” they write.

Furthermore, virtually all toxicology studies are based on the oral route of exposure, which means that risk assessment, according to Harvey and Everett, is “largely based on assumption, opinion and the technical regulatory instrument of GRAS (Generally Regarded as Safe).”

Underarm deodorant that does you good.
50% Magnesium Oil 50% Distilled Water. Put in a little spray bottle. May sting a bit if you have just shaved!!!
We don’t get enough Magnesium and it gets absorbed faster through the skin.

(GS is not George Soros!)